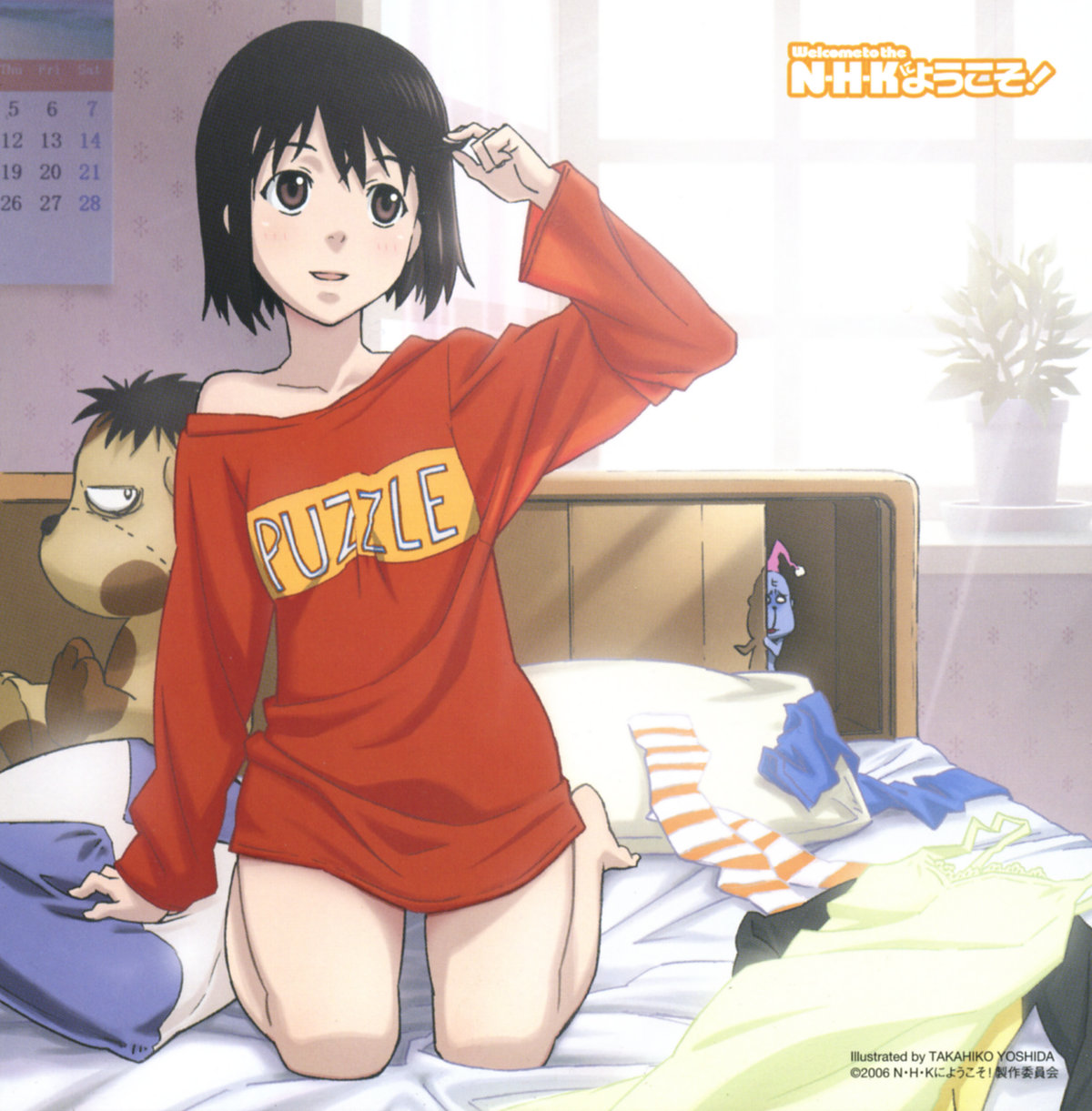 Tatsuhiro Satou is a hikkikomori, one who secluses himself at home and finds it difficult to have a job or go out of the house. He meets a strange girl, Misaki, who for unknown reasons, schedules meetings with him to help solve his ‘hikkikomorism’. Yamazaki is his new neighbour, a previous kouhai of his who is an otaku and not very socially accepted. Watch as our characters struggle with life and as they overcome their anxieties.

Welcome to the NHK is essentially a masterpiece, a godsend to almost everyone who has felt very socially conscious of themselves, or have strayed off the righteous path of everything that we ‘should’ be.

Perhaps the best part of the anime is that our characters are not stereotypical anime tropes, not fit-in run-of-the-mill average black hair protagonists that wielding swords and being op, not your heroine that squeals ‘save me!’. No, Welcome to the NHK instead shoves a whole pile of realism dung at you and shows you a very realistic character background. These characters could have been real persons indeed. Normal, troubled, and normal.

When we are shown Tatsuhiro’s apartment, the number of trash bags was almost equivilent to the number of stray hairs on his unshaven chin. Through the series, we learn that even in high school, he only attended club with another senior, and we do not ever see scenes of him talking to anyone else, even on campfire night. It’s likely that he was more of a ‘loner’ kind of character, one who rarely interacted with others. While Hyouka does seem to have a similar character, the Hyouka group do have their own fun and joy in literature club. Contrary to this, Tatsuhiro’s high school life did not seem to have all that blossoms, which is more likely to happen in real life.

We are also introduced to the Class President of Tatsuhiro’s high school class. She was very diligent and tried to motivate the class to put in their all for the cultural festival. But unlike in all the other anime out there that show students to be very enthusiastic about cultural festivals, the likely reality in Japan is that students are not as invested in making their high school life a memorable one. Some would find it silly to give their all, to idealistic, as the students in Tatsuhiro’s class did. Bitter dose of realism, check.

What’s worse is how Class President personality changed as she faced the harsher realities of life; not being paid for work, getting implicated in scams, having to support a hikkikomori brother. We don’t choose our circumstances; life isn’t necessarily fair. Would you be able to stick to your values, or would life sway your morals? It’s not an easy answer.

Yamazaki’s backstory that comes in later on in the series brings us even more questions to ponder. Do you have control over your life path? With him needing to inherit his family’s farm, yet he made a gamble, left for Tokyo and entered a vocational school in game making because that was what he wanted to do. When he had no choice but to return to his hometown, did he return defeated?

Even Tatsuhiro’s senior, ‘Senpai’. With her obsession over conspiracy theories, and heavy pessimism, she still managed to make her best out of life and find a lover. When life gives you lemons, make lemonade? Yamazaki too, while he broke up spectacularly with the girl in vocational school, he managed to find a girl in the countryside and settle in. Perhaps this is a salient reminder that we are unlikely to always get what we want, but we have no choice but to make the best out of it. In the end, Yamazaki did not return to Tokyo to complete his vocational school as much as Tatsuhiro wished him to return. No convenient ass-pull twists/ ending, check.

In fact, it is only when things reached an all-time low, that things could dip up again. Misaki stopped bringing food over to Tatsuhiro, Yamazaki had moved out so Tatsuhiro could not steal his food supplies, his mother could no longer afford to give him allowance. Tatsuhiro was starving. He was forced to look for a job to feed himself. As the show succintly puts it, if they get hungry, humans will work.

This is such a great watch as it conveys this sense of warmth and authencity in its message that other anime do not. It’s a great show about living.